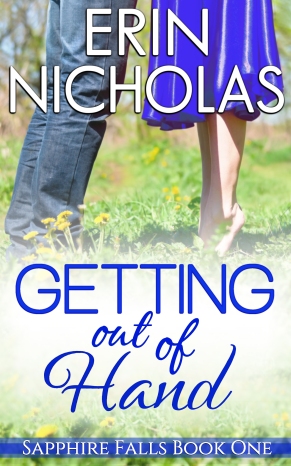 Sapphire Falls has few good memories for Mason Riley. So what’s he doing in the middle of the annual town Festival/class reunion eleven years after leaving town without a look back?

Letting the most popular girl in town—then and now—kiss up to him.

Mason has come a long way from the nerdy outcast Sapphire Falls remembers. His genius IQ has helped him make a name for himself with everyone from the World Health Organization to the White House. He’s also got the bank account to make the Mayor of Sapphire Falls herself—the girl who broke his heart in high school and the one who now wants him to donate to the town’s big building project—take notice.

He can’t wait to tell her no in person.

Adrianne Scott loves Sapphire Falls. The sleepy little town where her college roommate was elected Mayor has been the perfect place to escape the fast-paced, high stress sales job she had in Chicago. She’s happy, healthy and the new project means her dream candy shop can now become a reality. Everything is good in her quiet life. Until Mason Riley comes home.
Mason sure doesn’t look—or kiss—like a socially awkward geek. In fact, he makes Adrianne’s heart pound like nothing she’s ever experienced. Which means she needs to stay far away from him.

A great plan, until her friends inform her that Mason’s donation to the project is dependent on keeping him away from the Mayor while he’s in town.

Now all Adrianne has to do is keep Mason busy, distracted and feeling good about—and generous toward— his hometown… oh, and avoid falling for the world-saving, nerd-turned-hot-guy in the process. 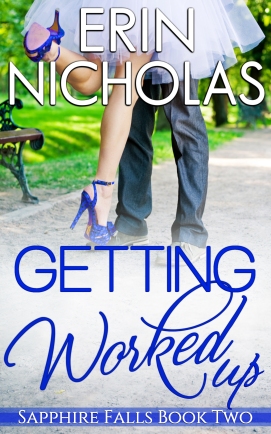 Phoebe Sherwood is in love with the perfect man. Well, except for the fact that he’s in love with another woman.
But Phoebe isn’t the type to let a little detail like that keep her from getting what she wants. Now that Matt’s preparing to propose to someone else, Phoebe does what she does best—she starts plotting. And as she’s forming her plan, she’s presented with the perfect addition—Joe Spencer.

Joe is in town to retrieve his… sort-of… fiancée. Who has, inconveniently, fallen in love with another guy. And with Sapphire Falls… and decided to stay.

But Joe and Nadia have been friends since childhood. Plus she promised to marry him to save him from his wicked ways. With his wicked ways on the verge of ruining his life, he’s here to remind her of that.

Bright and sparkly. That’s Joe’s first impression of Phoebe. He’s always been attracted to sparkly things—like neon casino signs, sequined evening gowns and Porsches. In fact, his affinity for those things—and the trouble they can cause—are exactly why he’s determined to change his habits. So his first order of business is staying away from Phoebe.
But when she announces that Joe has a starring role in her plan to break Matt and Nadia up, ignoring her becomes impossible.

It’s clear that Joe’s a great guy, but if he’s going to get Nadia back, the city boy is going to need to learn a new way of life. If country line dancing, guzzling homemade moonshine and getting rid of his custom-made suits is what it takes to fit in… he’s got some work to do.

Good thing Phoebe knows everything there is to know about life in Sapphire Falls.

And everything will be just fine… as long as they can keep their hands off of each other and remember which hearts they are trying to win over.
Available at all e-retail sites, July 2014! 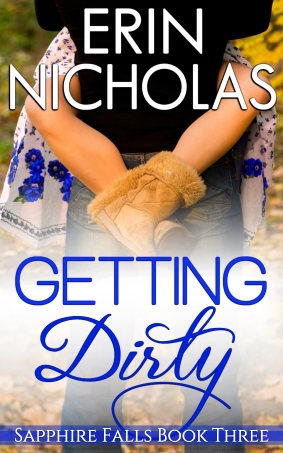 Travis Bennett is exactly the kind of guy Lauren Davis has been avoiding for the past nine years. Religiously. Stubbornly. Successfully. She knows too well how easy it is to let love and lust ruin perfectly laid plans. And a good-looking, sexy small town farmer who has no plans or ambitions beyond the borders of his corn field is not going to get in her way. She’s got important stuff to do. Her company is doing ground-breaking research and literally changing the way poor countries in the world are producing food. Not exactly something she can turn her back on. Not to mention the travel, the excitement and the adventure.

Travis has everything he wants or needs—a quiet, simple life in his tiny hometown of Sapphire Falls, a successful farm and his friends and family all around. A hoity-toity city chick who looks down on everything from the local coffee to his favorite music is the last girl he’s bringing to Sunday dinner with his grandma. No matter how good she looks in the cut off denim shorts that are supposed to pass for her “country wear”. So why can’t he stop thinking about how fun it would be to get Dr. D dirty?

Lauren doesn’t do casual sex-only relationships and she and Travis could never make something work long-term, but she can’t kick her crush. The guy is exactly her type—except for the never-wanting-to-leave-Sapphire-Falls thing. But she made the mistake of choosing a guy over her dreams and plans once before. Never again.

One possible solution? Spending more time with Travis in his “natural habitat”— experiencing of the country life in Sapphire Falls—during the two weeks she’s stuck here. Bingeing on all of the things she craves but that are counterproductive to her plans may be the fastest way to remember what she wants… and what she doesn’t.

Travis wants to be over his stupid fascination with the stuck up city girl too, so he goes along with her plan, giving her a hefty dose of life in his world. They have nothing to offer each other and after a couple of weeks of having that thrown in his face over and over again, surely it’ll be good riddance when she finally goes back to the city.

Getting Out of Hand: June 19
Getting Worked Up: July 17
Getting Dirty: August 21